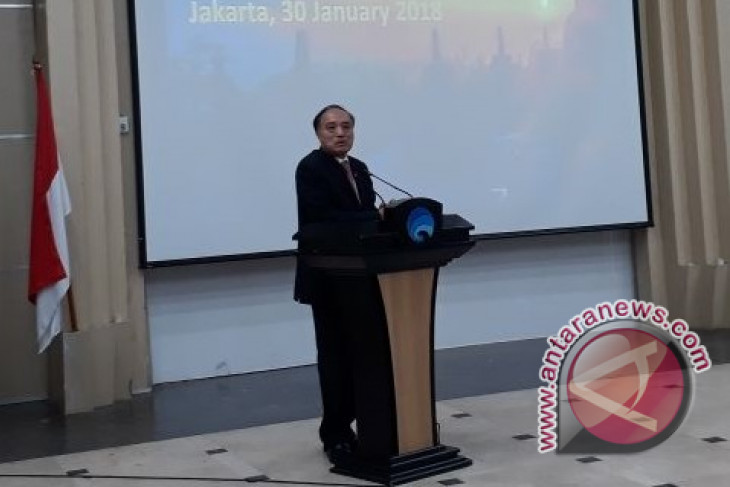 The International Telecommunication Union (ITU) Secretary-General Houlin Zhou during his general lecture at the Communication and Information Ministry office in Jakarta, on Tuesday (30/1/2018). (ANTARA/Dyah Dwi A.)

Jakarta (ANTARA News) – The International Telecommunication Union (ITU) Secretary-General Houlin Zhou has expressed belief that the infrastructure development of information and communication technology (ICT) in Indonesia will be ranked second in the Southeast Asia within the next two years.

“It would be achieved if the national government and stakeholders have a clear vision and plan for the development of the ICT,” Zhou stated, during a general lecture at the Communication and Information Ministry office in Jakarta, on Tuesday.

According to him, Indonesia has a good strategy to focus on the ICT development, viewed from the Palapa Ring broadband projects, which is expected to connect around 500 regions in the archipelago by 2019.

Zhou noted that China and India were considered to have a high potential for the ICT market. However, he predicted that it is the time for Indonesian market to also steal the world`s attention.

With a population of around 250 million people and a growing economy, Indonesia has the potential for a position in the dynamic Southeast Asian region and a lot of creative young people to build the future of the country.

Communication and Information Minister Rudiantara admitted that Indonesia`s vision to be among the best two in terms of ICT infrastructure is indeed an ambitious one, considering that the internet penetration in 2017 had reached 55 percent, covering 145 million people in the country.

Such coverage, he added, is still bigger than the total population of Southeast Asia.

“Therefore, globally, Indonesia will be seen as the spearhead of digital development among ASEAN countries,” Rudiantara remarked.

Indonesia currently has four of the seven unicorn companies in the Southeast Asia, in addition to a non-Indonesian-based unicorn, which has the country as its market.

Rudiantara is optimistic that the ICT in Indonesia will continue to grow, as many more unicorn companies would be emerging in the country.
Editor: Gilang Galiartha

The State of Fintech in Indonesia (Infographic)
Scroll to top